Steps off at 12 noon at corner of Maple Avenue and North Long Beach Road.

established in 1997, with the motto "The Parade That Cares and Shares".

Since its inception, over $300,000 has been distributed to national, local and Irish charities. 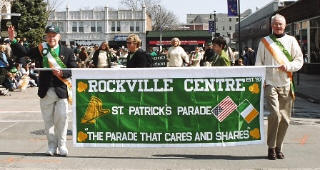 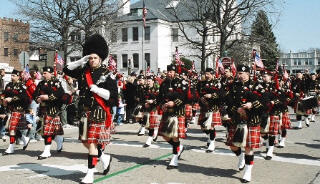 So how did this parade begin? In 1994, the founder of the parade and the 2006 Grand Marshal, David Crowe opened Lily Flanagan's Restaurant in Rockville Centre. Passing by Village Hall he observed four proud Irish men hoisting up the Irish flag and he wondered why Rockville Centre did not have a St. Patrick's Parade. He envisioned a parade that would have thousands carrying the Irish and American flags rather than just four men. Organizationally a huge challenge awaited, but undaunted the idea became the reality it is today.

At a Venison Dinner co hosted by Gary Krupp , David and Joe Roughan were introduced to Bishop John McGann RIP. David said "Bishop it is an honor to meet you, why don't we have a St. Patrick's parade in Rockville Centre?" The Bishop replied that the Garden City Parade had already been established and was an annual success. This was not good enough for David and he asked the Bishop's permission to form an organizational committee. The Bishop agreed and David and Joe went to speak with Mayor Murray and Bud Cosgrove who embraced the idea with great enthusiasm. Bud exclaimed "The Parade will ignite us all." Gary Kmpp called Joe Kelly and Mike O' Leary and the organizational nucleus took shape.

The first meeting took place at Lily Flanagan's and Merry Krupp jokingly quipped "I can't believe that I am representing all of the Irish Catholic women in Rockville Centre!" The concept of the parade was formally explored and expounded in a lively discussion with many ideas and themes. The Village Administrator, Anthony Cancellieri became involved at this stage and the committee decided to invite Judge Williams to a meeting at Joe Roughan's house to formalize a working constitution towards incorporation. Shortly after this, 501 C 3 status was adopted and Bob Wolf coined the expression "The Parade that Cares and Shares"

Lily Flanagan's became the Parade headquarters. David and Bud were elected Parade co-chairmen and Joe Kelly was elected to the fund raising chair. Bishop John R. McGann RIP was elected the first Grand Marshal. The annual parade date was established as the Saturday falling one week after St. Patrick's Day, March 17th. The level of organization involved to stage the parade was initiaHy daunting. Many meetings were held and aL the end, Rockville Centre's infrastructure of Village Administration, Police, Fire, Sanitation and Park Departments ensured that all would be ready for the step off.

The official Parade Route began at the intersection of Long Beach Road and Maple Avenue with participants lining up on Sunrise Highway. The Parade would proceeded (as it does loday) along Maple Avenue, passing by Village Hall, and St. Agnes Cathedral ending in Parking Field H2. The duration of the Parade was approximated to be two hours.......... ten years later we march on and the rest is history.

The Parade emblem is a fusion of Irish-American Culture and Traditions as represented by the American and Irish Flags. The Irish Wolfhound predates Celtic Ireland and is a powerful symbol of majesty and pace. The Irish Wolfhound is the mascot of the Fighting 69th Regiment whose motto best epitomizes the temperament of the Wolfhound "Gentle when stroked, fierce when provoked." The Wolfhowld on the emblem is 'Desmond' the first Rockville Centre Parade Mascot.

The Harp and the Shamrock are traditional symbols which are held dear to many Irish Americans. The Harp represents the great musical heritage of Ireland while the Shamrock is symbolic of Ireland's Religious Traditions. The Artwork on the emblem was done by Irish American Artist Bernie O'Boyle.

The Rockville Centre St. Patrick's Parade Committee commissioned this Brooch in 2003 to be presented to the Grand Marshal each year to wear during the Parade Day. The Brooch is back dated to the First Parade, and all the previous Grand Marshal names are recorded in the case. The idea of the Brooch is to continue the tradition of succession in terms of those who have previously been honored as Grand Marshal.

The Brooch design is from an original concept designed by John and Maureen English. The Brooch was made by Mullingar Pewter Co. Westmeath, Ireland, and was graciously donated to the Rockville Centre St. Patrick's Parade Committee by Kathleen Alcock, of Kathleen's of Donegal.